Boo Cat is a nymphomaniac werecat, who is a close friend and sometimes a love interest of Tarot.

When she is in her werecat form, her entire body is covered in a slick black fur. She has two pointed cat ears on the top of her head and a long cat tail. Because she "ascended" (came of age and became a werecat) on Halloween night, her body also possesses a bright-orange jack o'lantern face on her chest and paw prints on her palms and feet and she stands at five foot ten inches tall. (178 cm)

Boo Cat is a free-spirited individual, notable for her fearless attitude and cutesy view on life.

She is noticably the most sex-positive character in the entire series. She is all-ways turned on sexually (whether the moment calls for it or not) which has been met with frustration from various other characters. She is always in a state of undress, and makes it a habit to strip down completely when she turns into her werecat form. Whether or not any of this is due to her werecat nature or simply because she believes this herself is never given.

She is a committed lesbian (or at the very least bi-curious while favoring women), having only persued relationships with other women, though she is prone to flirting with Jon in a comedic fashion.

As a werecat, Boo is able to shift between her normal human form and her werecat form. This form provides her with various abilites based around this, including advanced strength and speed, durability, cat-claws and various other powers.

While generally non-violent, Boo Cat is shown to be a very well adept at fighting humans and other magical creatures.

As a werecat, Boo only possesses her various, superhuman abilities while in her werecat form under the light of the full-moon. In human form however, she is nearly powerless, needling to rely on her own wits and stamina to evade danger.

Like all shape-shifters, Boo Cat is naturally repulsed by wolfsbane.

Boo Cat was transformed into a werecat when she was a young girl. On Halloween night under a full moon she was surrounded in a ceremony by female members of her family and the Cuddly Pride. They ritualistically anointed her body with nine oils to prepare her for the change, then she stood alone facing the orange, autumn moon and felt the spirit of the cat. After the transformation was completed the clan washed her with a ritual cat bath and initiated her into the pride.

She is a resident of Salem and girlfriend of the vampire, Licorice Dust.

Boo first met Tarot while she was working at "Boo-Teek", a store she runs herself. She spends most of her time wiggling out of her panties without her hands, for practice. When Tarot came in shopping for new and larger bras, Boo was immediately attracted to her and was delighted in taking the young witch's measurements,selecting bras, and watching her try them on. Before she left, Boo stole the panties that tarot worn, later that night she transformed into a werecat and used Tarot's panties to track her down at her house, called Witches Hollow.There she found Tarot asleep and couldn't resist touching and making love with her, having to under the bed every time she almost woke, until morning when she reverted back to human and quickly left without being seen or discovered. Tarot described Boo as her "first real love and lover". Boo was in a relationship with Tarot for two years until the events in #6. Since then, she still retains a friendly relationship (sometimes acting as her on-the-side lover in certain circumstances).

Jon and Boo Cat seem to be on good terms. Boo Cat seems unaffected by Tarot's relationship with him, though odds are she only wants a physical relationship witht the witch, and is even prone to flirting with Jon in various ways. Jon on the otherhand does not seemed bothered by it, but it implies that he is slowly becoming less content with their relationship. 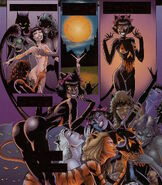 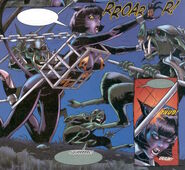 Boo being captured by Azure's forces.

Boo Cat as "Cemetery Kitten" during the battle against Azure.
Add a photo to this gallery
Retrieved from "https://tarotwitchoftheblackrose.fandom.com/wiki/Boo_Cat?oldid=4411"
Community content is available under CC-BY-SA unless otherwise noted.